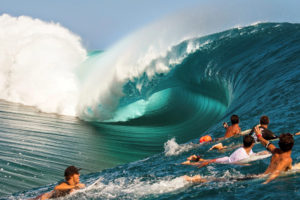 Today we talk about the code of surfing and localism, a phenomenon that occurs in most surf spots in the world. Being local to an area implies having a knowledge about that area, feeling rooted to that place and often a feeling of wanting to preserve those places, those waves in this case, for future generations. When a surfer travels, he quickly observes that localism is a reality and that in many parts of the world, that localism is excessive, misinterpreted and provokes disputes and confrontations within the water. Fortunately, that aggressive localism of “only locals” has been decreasing over time, but there is a complex reality that must not be overlooked.

The degree of localism usually depends on the quality of the waves in that place. The higher the quality of waves, the greater localism. Many people misunderstand localism, as an aggression toward the unknown, or to the foreigner, where the local, takes advantage of their situation as such, to catch more waves and abuse their local status.

On Somo Beach , there is a moderate localism, but it has been growing in recent years, due to the massification in the water. Undoubtedly, in the two spots that are more local in Ribamontan al Mar , are Somo and especially on the island of Santa Marina .

However, localism is necessary as such, exists in all areas of society. Everything has been taught from father to son and our knowledge has been handed down from generation to generation. There is a positive and necessary localism, where the most adult and the most experienced, have to transmit all their knowledge to the younger. This spirit aloha as it is known in Hawaii, it is necessary to introduce it within our municipality and from the Cantabra Surf School , we believe that it is of paramount importance, given the massification that is looming at our doorstep. This positive localism, to transmit good knowledge, should be strengthened in surf schools and by signage at the entrances to the beaches.

Nat Young , one of the legends of modern Australian surfing, designed what would be called, “The Surfer’s Code” “Code of surfing” , rules of the surfer, where he explains the natural rules and rules of sport, The proper behavior of a surfer in the water.

In any case, we must eliminate that aggressive localism of our beaches, guarantee that positive localism and teach the young, something as simple as the sea is everyone’s and for everyone’s enjoyment. But, at the same time, we must teach and make the tourists see that when they reach a new surf spot, there are some rules and a surfing community, that loves and respects the sea, surfing those beaches daily, living in Harmony throughout the year and that when they travel to other surf spots in the world, they also know how to respect and listen to that localism.

Given this code , who has priority to catch a wave? Respect outside and inside the water. When you go to a beach, there are some rules, local people, internal laws. Study the peak where you are going to surf, avoid bad rolls and ALWAYS before rowing a wave, act as if you are at a traffic light, look to your left, look to your right and if no one goes in the wave dale. The person who is more involved in the peak is the one who will have the preference. There are peaks of right and left, so communicate, share waves, share is to love, in and out of the water. Let waves pass, make sure that everyone has their small dose of happiness. Respect and you will be respected.

If there are many surfers and I am a beginner , where am I? Avoid those areas, if you are a beginner, do not do anything sharing that break with people more experienced. Your time will come, but we have all started from below, watch, watch, this way you learn a lot and once you feel safe start putting yourself in the arms, side of the waves, wait your moment and remember, wave you remit, do not hesitate. Once surfing, open up and use the currents so as not to hinder the other surfers. If you respect, you will be respected.

Other rules not written in this surfing code and that should be taken into account are:

In this pyramid we wanted to express how the Cantabra Surf School understands the local norms of preference that any surfer should take into account when traveling to a new surf spot.